Book Talk – A Frog Thing from Marci Duncan on Vimeo. 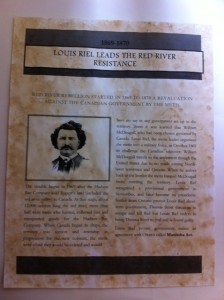 For my SDL History project, i decided to work by myself becuase i thought it would be a good challenge for me. For my project I covered the topics, Hudson’s Bay company sells Ruperts Land to Canada, Louis Reil leads the Red River Resistance, Manitoba enters Confederation, North- west mounted police is formed and Canada makes 11 treaties with Aboriginal people in the west. I was trying to decide how to show  my work and i figured out that i wanted to make a scrapbook, I took tea bags to colour the paper to make it look old. I really enjoyed trying SDL in our class room.

For my SDL history project me and Lily were partners and we chose to display our work in a prezi.  In our prezi we described many different points. we chose to pick what life was like in the 1800’s, reason for the early settlement of english canada, major causes of the war in 1812, we also each prepared a biological scetch of a person from 1759-1812. Overall I think we put in a lot of effort and really took our time to make it to the best of our ability.

What could this be? Make an inference and back up your idea with evidence or an example. 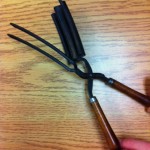 On Thursday, April 18th, I went to a writer’s conference. It was very cool!

When we first got there, before everyone else had arrived, a nice man my Mum knows introduced me to Kenneth Oppel (author of series like Airborn and Silverwing) and I got some of my books signed.

Then, a woman named Alyxandra Harvey, who is an author of a series about vampires, talked a bit about how she liked to write and where she found inspiration.

After that, Kenneth Oppel talked about how he first discovered how he wanted to be a writer, how he got inspiration, how he first got published, and the processes he actually goes through in writing a book and getting it published. He said he writes his books at least 4 times before he sends it to the publisher!  Mr. Oppel also told us we should sniff books because they smell good and will guaranteed make you have a better life!

After the opening speeches, there were options to go see different writers and a station about how to get published. I chose to stay for the Q&A with Kenneth Oppel.

People asked lots of different questions. Some of the questions and his answers were: “If the library was burning down and you could only save one book, what book would you save?” He said the yellow pages because then you could still find people and places. Another question was “do you base your characters on people that you know?” Mr. Oppel’s answer was that he takes some features from people that he knows but he doesn’t entirely borrow a person.  He was also asked “How many books do you plan to write?” His answer was he plans on writing until he dies, and he didn’t want to set a limit. The question I asked was “Do you have any say in what goes on the covers?” His answer was that in Canada his publishers are more flexible, but in the States, he usually doesn’t have much input, and they pretty much control what goes on the covers. If I wrote a book, I would want to decide what the cover looks like, because that is a very important part of the book, and can influence sales. Some questions I would have liked to ask were “What advice would you give to someone  who would like to start writing?” or “How did you learn some of the slang from the 1800’s in Europe so you could accurately write This Dark Endeavour?”

I think I learned a lot from this conference. I really enjoyed going, and it was tons of fun. I learned what it takes to get published, how long the actual process is to write a book, what the publishers might say/do, and that you should sniff books. I enjoyed meeting Kenneth Oppel and listening to his words of wisdom. 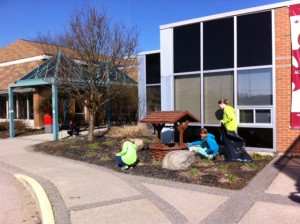 Today, on Earth Day we walked around the community picking up trash/litter. We also went to Trilium Manor and cleaned up the gardens and property. Our main focus was to help out the community to seem more welcoming, clean and beautiful. Earth Day is a day to celebrate the beautiful land Mother Nature gave us. Now the neighbourhood is cleaner.

What can we do to step more lightly on our earth?

This was the question that we ask every student in our school.

Each student traced their foot on recycled paper and then added a pledge about what they could do to lighten their footprint on the earth. The footprints are posted in the hallway by the gym to remind us that together we can make a difference. Earth Day can be every day of the year. 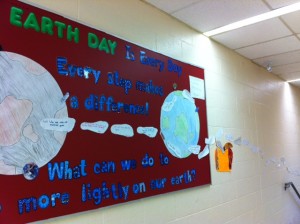 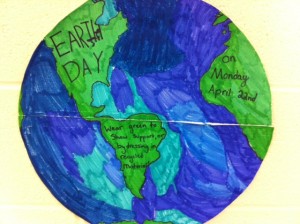